Destiny'Story found a happy End. If you want to support us in other cases like destiny's - Donations are very welcome!

Finally destiny was made to leave her box. she got a nice soft bed. She is scared, but not panicky. Now she has to get used to the environment and the people who mean well with her in very small steps.

Today it is one month that Destiny has been found. She is doing so much better. Still shy, but we work on it.

The first hairs are coming. Destiny loves her box. She feels comfortable there. But soon she must be accustomed to the garden also. 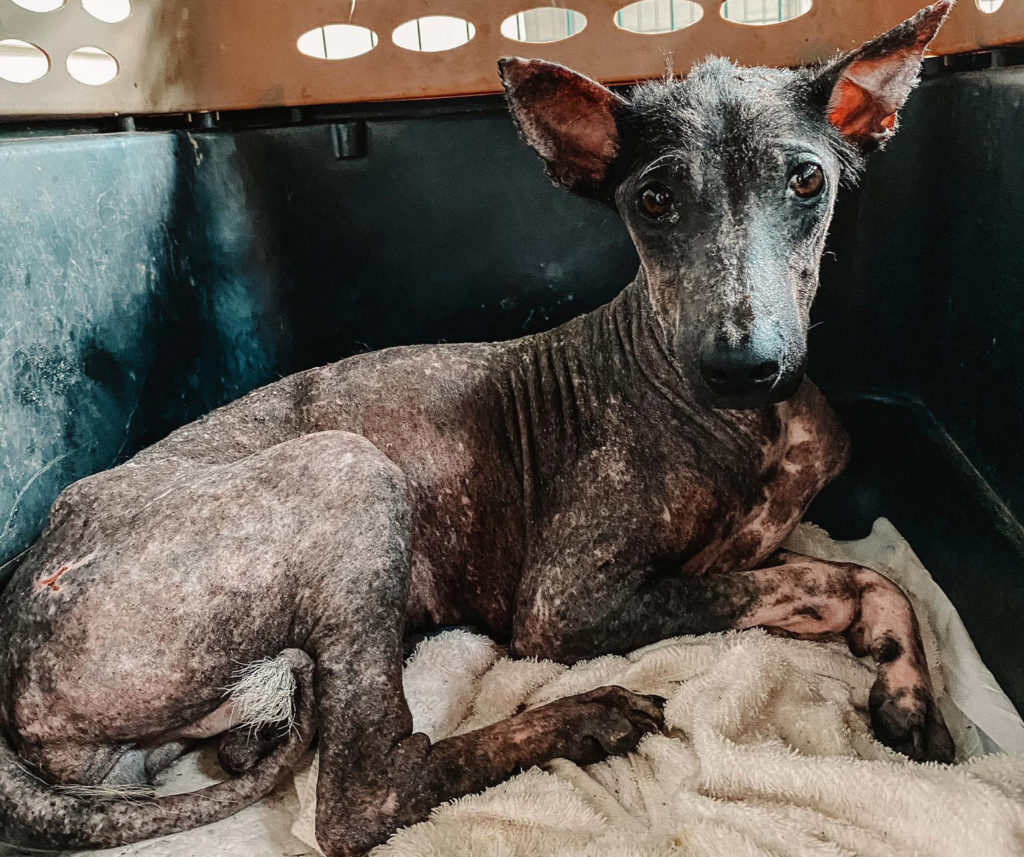 Destiny is definitely out of the woods now. Now socialization is the most important thing. The hair is coming, that is no question, the wounds are almost healed. But her soul is still far from recovered. Most of all she likes to sit in her box now. Since we do not want to overburden her, we take it slowly. Nevertheless, it is clear that she must learn to trust us humans. She has to learn how beautiful life can be.

But what we see is that her look is completely different. She is attentive and looks directly at you. A good sign. 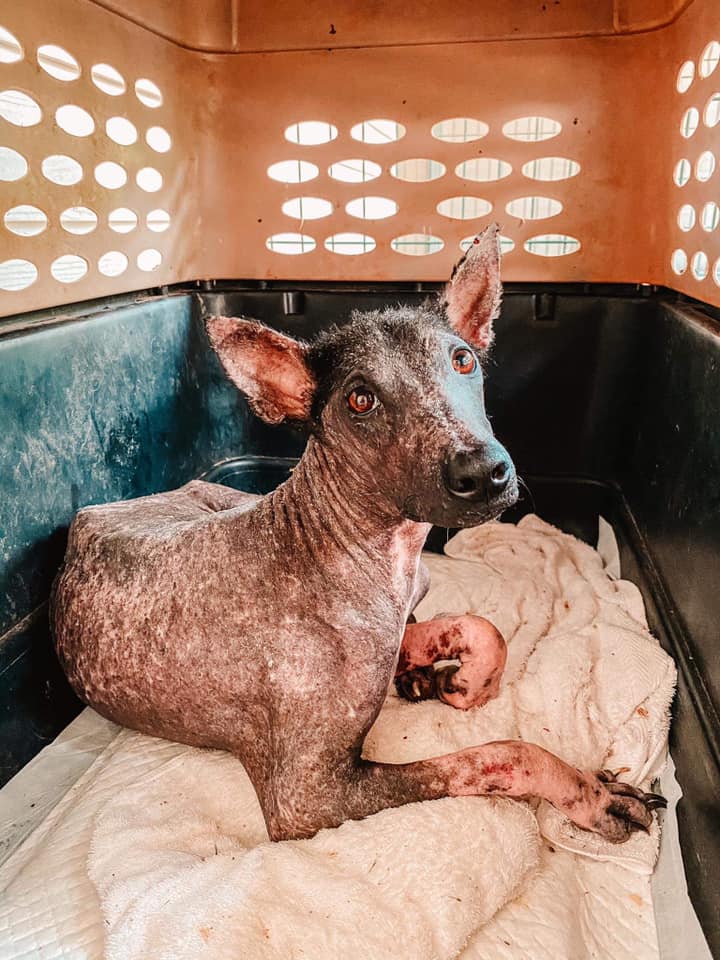 From Today on Destiny is with us in the Help Point. We give her all the time in the world to settle in. The first goal is for her to be able to trust us. Everything else will then come naturally. 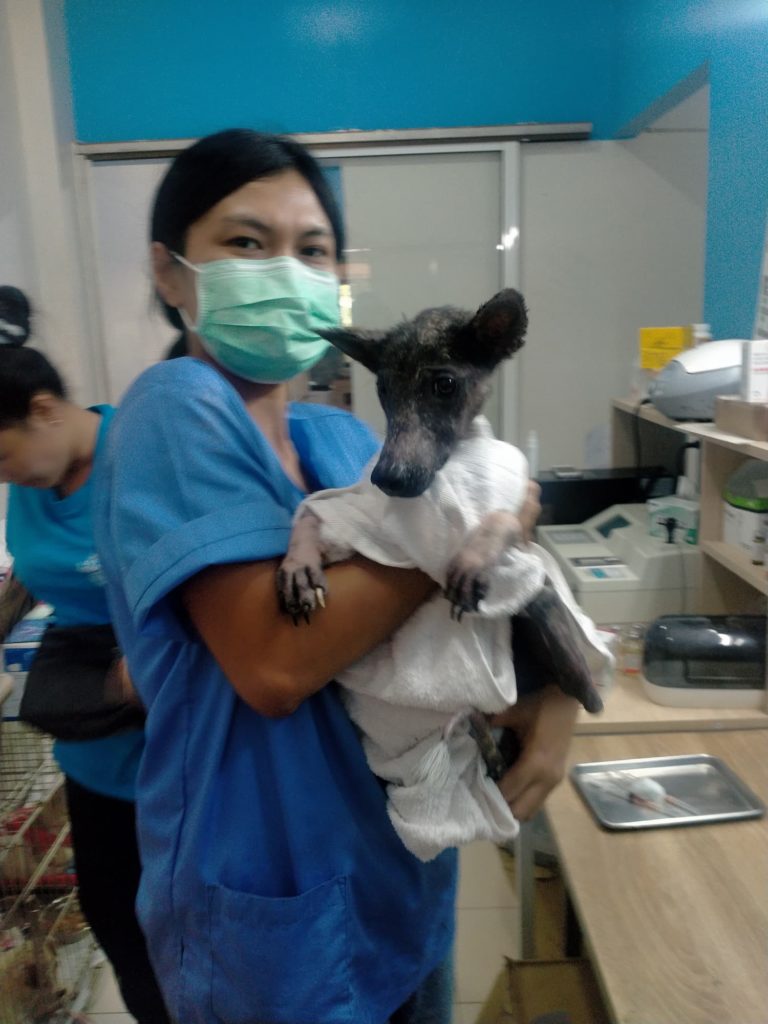 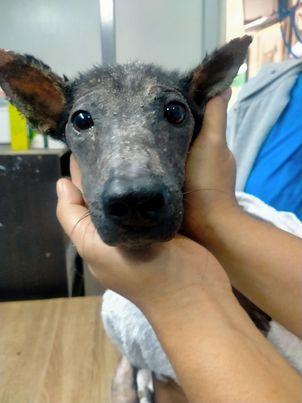 Today Destiny has to say goodbye to Dr. Tookta. She will be taken to Help Point where she can develop. Dr. Tookta did a great job as always and saved Destiny’s life. Now the ladies of Help Point are taking over and will socialize Destiny and build her up mentally.

Every day a tiny step forward. It won’t be long before Destiny moves in with us. We are prepared and are happy to accompany the little one on her still very long way.

Today Destiny is much more active. Good progress. She loves the special Food our Agnesa brings her. We think that we can move her on monday to our Help Point.

Today Destiny is much more active. Good progress. She loves the special Food our Agnesa brings her. We think that we can move her on monday to our Help Point.

First walk to the garden of Dr. Tookta. She is so so shy. But at list she can walk again and she has appetite.

Today, we don’t see any noticeable improvement in Destiny. It takes time.

The wounds heal slowly. We fear and hope. But every day that Destiny survives, eats and sleeps is a good day.

Because we are all very anxious with her. It would be very nice if the little dog could recover and look forward to a life full of love and hope.

But between us, it is not in our hands. We just do what we can.

Today Destiny is dewormed. First, the tablet is spit out

Dr. Tookta works as always calm and concentrated. You can see from her teeth that she is still  young. The biggest challenge will be that she can trust us humans and feel comfortable around us. This is still a very long way to go. But since she still seems young, we have a chance to accompany her to a happy dog.

Some things will be impossible to catch up, but we will try everything to take away her shyness.

Today Destiny took a huge step forward. She eats really well. It has also become much stronger. And the blood values are also good. It has no blood parasites. This test is available from today. That’s really good news.

And so we dare to share the fate of Destiny with you. As soon as she is over the mountain, she will come to our Help Point where we will look after her until she is ready for a beautiful home. But see for yourself, this is Destiny today, 02/27/2021 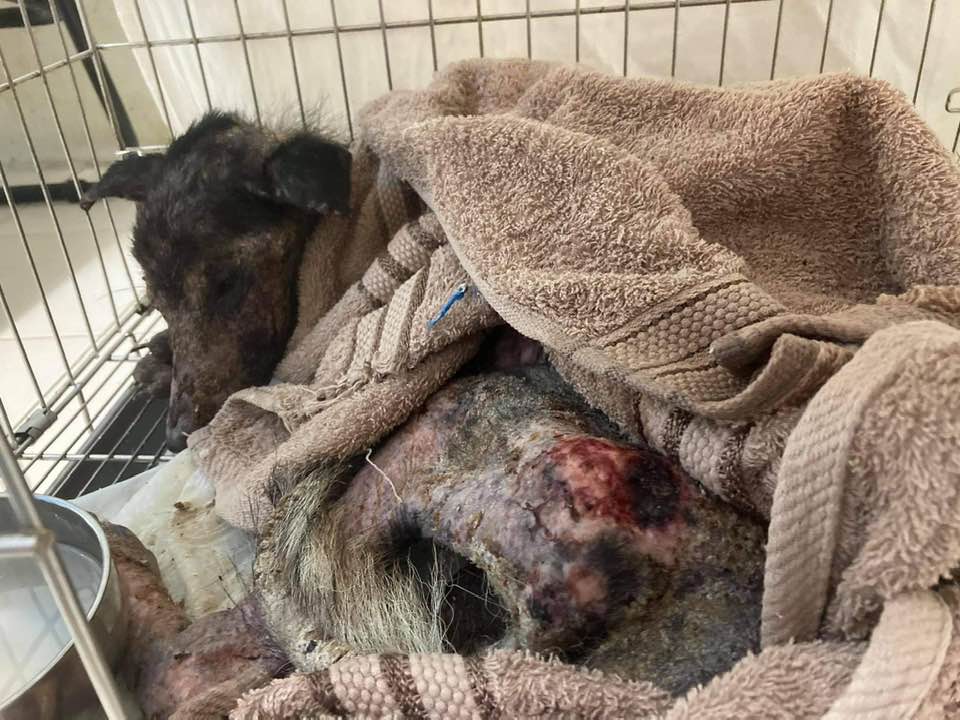 Sleep is good for you and heals wounds. Sleep also gives strength. Destiny is just sleeping. She ate a little bit and immediately went back to sleep. A good sign for us.

We really hope that she will survive. 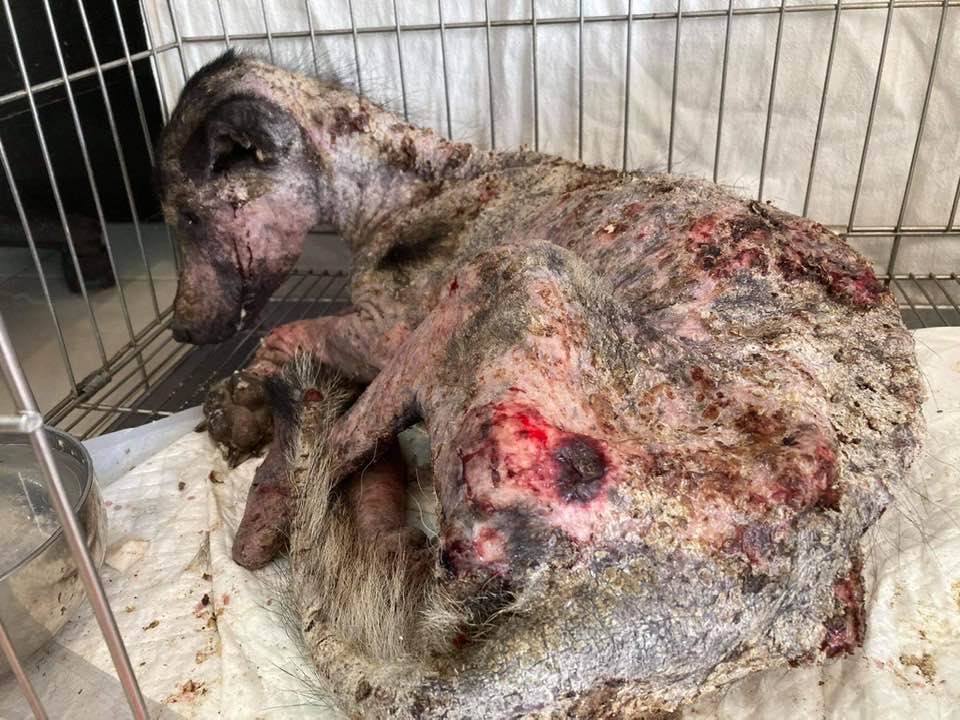 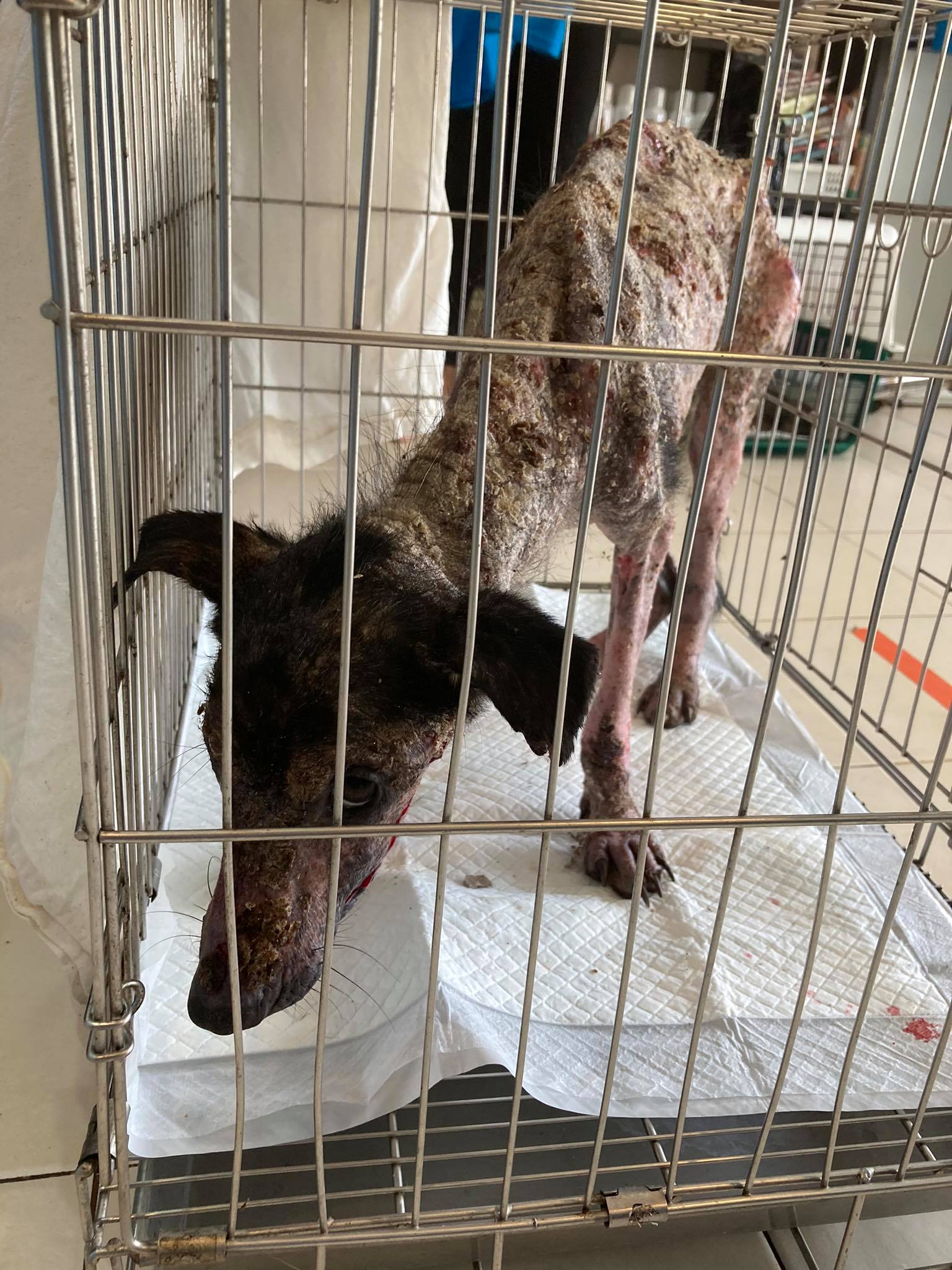 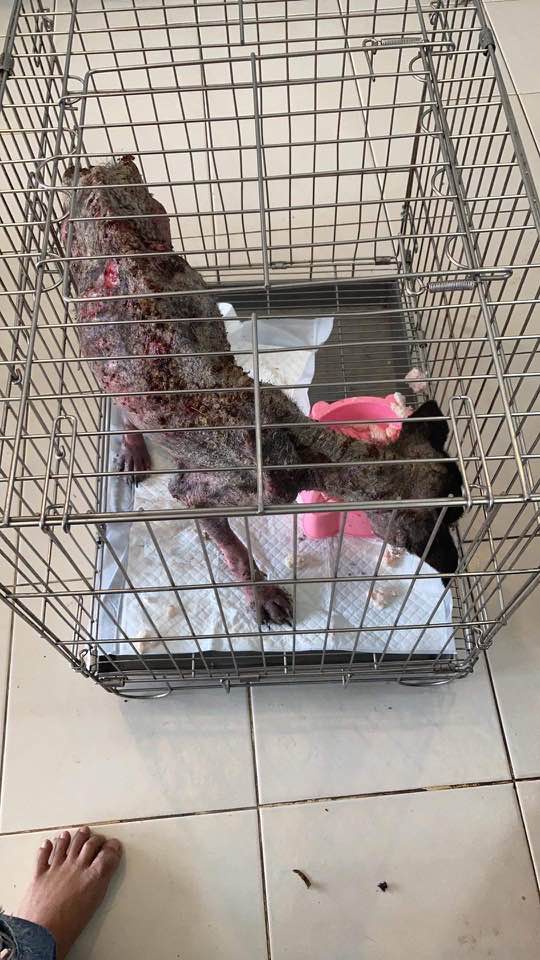 A nice Tourist calld AVKG, she found a Dog in a very bad condition, on the floor. Dr. Tookta was shocked. She would never have believed that this is possible with our good network on the island, that an animal in such a bad condition was not discovered earlier.

This can only be explained because Destiny is very shy and probably hid from people. When it got dark she probably went looking for food. Not very successful as you can see.

Then the fear, will she survive or not ……………. they wanted to try and covered them with medication. The dog has mange, which can be treated well. But maybe the organs are already damaged, you didn’t know. We believed that fate would decide and we christened the poor female Destiny. 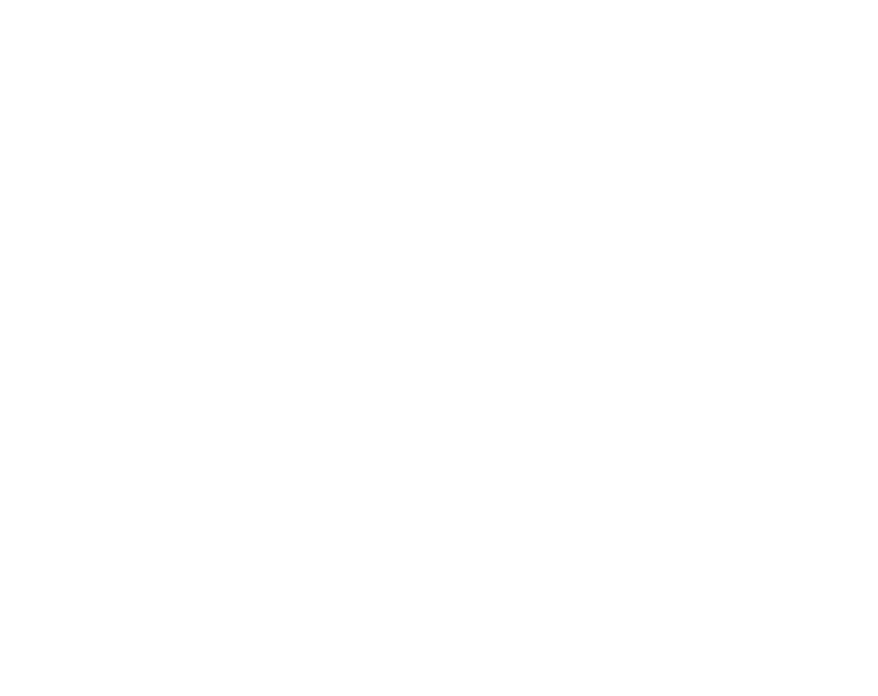 DONATE WITH QR CODE to our Pay Pal Account 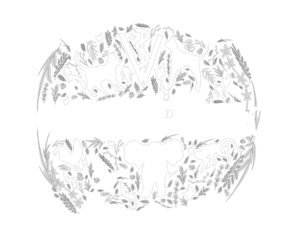